Chambers was first established in 1949 by Anthony Cripps QC and was located in 1 Harcourt Buildings, Temple. Anthony Cripps QC continued as the head of chambers for over 35 years, handing over the reins to Seddon Cripps in the 1980s.

By the time of his retirement Anthony Cripps QC had established one of the leading Common Law sets in London and was himself involved in many of the high profile IRA trials during the 1970s. He also maintained a high profile civil practice and was the Senior Judge at the British Sovereign Bases in Cyprus.

When he retired he handed over the reins to his son Seddon Cripps who was Standing Counsel to HMRC and the set continued to have close links to the Attorney General’s office with a number of members of Chambers appointed as Standing Counsel or occupying senior positions on the A-G’s List. The set also continued to service private and public funded family and general Common Law work with a number of members maintaining exclusively civil practices.

Seddon Cripps was appointed to the Circuit Bench in 1998 and in due course became a Judge at St Alban’s Crown Court. He then moved to Aylesbury where he became a senior judge until his retirement.

Simon Buckhaven, a senior family practitioner, then took over as Head of Chambers and in due course oversaw a merger in 1995 with the civil set who then occupied the floor below at 1 Harcourt Buildings. Along with those practitioners came Ray Walker QC.

Charles Gratwicke was next elected Head of Chambers and remained in post until his appointment to the Circuit Bench in 2003. He went on to become Resident judge at Chelmsford Crown Court, a position which he still occupies.

It was during this era that a number of members of Chambers were also appointed to the Bench, including HHJ Stephen Robbins and Judge James Latter. Other illustrious former members of Chambers include HHJ Giles Rooke QC, HHJ Keith Simpson, HHJ Judith Rowe QC and Dominic Greive QC (later becoming Attorney General).

Upon HHJ Gratwick’s appointment in 2003, Martin Griffith was elected Head of Chambers and remained in post until his appointment to the Circuit Bench in 2007. It was during Martin’s time as Head of Chambers that the decision was taken to expand out of the Inner Temple and to purchase the freehold of the current building within the Square Mile at 5 St Andrew’s Hill.

The move was completed in 2007 and saw the arrival into Chambers of Simon Draycott QC who joined as joint Head of Chambers with Martin Griffith and took over as sole Head of Chambers upon HHJ Griffith’s appointment. Judge Griffith is currently sitting at Southwark Crown Court.

Simon Draycott QC, who had a formidable practice both prosecuting and defending serious fraud, remained in post as Head of Chambers from 2006 until his untimely death in 2016 during which period Chambers continued to prosper and expand.

During that period Chambers were joined by David Josse QC, returning from The Hague where he had been working at the International Criminal Tribunal for the former Yugoslavia. David Josse QC took over as Head of Chambers in 2016 and remains in post to this day.

After just short of 60 years in the Temple, Chambers moved to new and fully modernised premises at 5 St Andrews Hill. At 5 St Andrews Hill the tradition of service that has characterised this set of barrister's chambers is being brought into the 21st Century. 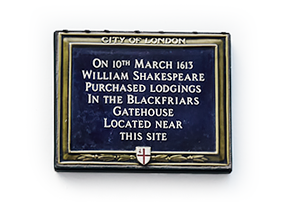 Chambers occupies an historic site on Ireland Yard, where William Shakespeare bought his London home. It is a 2 minute walk from both St Paul’s and Blackfriars. Shakespeare paid £140 for the gatehouse which a deed of conveyance for the property states was “…now or late being in the tenure or occupancy of one William Ireland… abutting upon a street leading down to Puddle Wharf on the east part, right against the Kings Majesties Wardrobe“.

The King’s Wardrobe was a department of the royal household and is still remembered in nearby Wardrobe Place and in the name of the church of St. Andrew’s by the Wardrobe. In the Victorian era, a furrier’s warehouse was built on the site. Chambers purchased this building and invested rather more than £140 in order to fully refurbish the interior to a high standard which is specifically designed to cater for the requirements of 21st century litigation.